Heck, this is MY blog so I can write about whatever I want (i.e., no math today; I’ve postponed the scheduled post for another time)….

Almost 4 years ago I began hearing a thump-thump-thump besides some courts where I played tennis. The more I heard it, and began watching, the more intrigued I became. It was pickleball, America’s (and perhaps the world’s) fastest growing sport (proverbially called a cross between tennis, badminton, and ping-pong, though that may not make much sense until you've played it); likely bound for the Olympics in the not-too-distant future (maybe 2028?).
But like many, I was hesitant to join in; initially one sees mostly older and retired folks playing the game, giving the impression of an activity for ‘older people’ — and even though I’m IN that category I often think of myself otherwise! ;)
Secondly, the sport involves widely varying colorful paddles, a wiffle ball, and a funny name, yielding an alternative impression that it is just for youngsters. Pickleball though is for ALL AGES; really, ALL ages, and moreover, for all heights, weights, body types, strengths, genders. There are people with knee or hip replacements, cardiac surgeries, bad backs, and the heartbreak of psoriasis, etc. playing the game… and playing it well! I’ve never known a sport where one can so easily meet a new opponent, scan them up-and-down, sizing them up… and be completely WRONG about their talent! Looks are deceiving.
There is one asset you do need for the sport and that is good hand-eye coordination; as with any paddle or racket sport THAT is required, but that's all (well, also a degree of patience and courtesy are required, as civility and camaraderie are major elements of PB).
Anyone who has ever played and enjoyed a racket sport will quickly become addicted to pickleball, and even those with no racket sports in their past stand a good chance of becoming obsessed!

Additionally, pickleball is far-and-away the most “social” sport I’ve ever witnessed, something I can’t explain adequately here, because you really need to experience it. Recreationally, it is most often played as a doubles-game with built-in rules insuring available partners. There are, as with any sports, very fierce competitors, but I think it fair to say that most individuals play PB, and play it a LOT, for the sheer fun and exercise… it’s not whether you win or lose, it’s how much fun you have, and how good you feel afterwards (a typical game takes ~15 minutes, before you're anxiously awaiting for another)!

Most cities of any size by now have indoor and/or outdoor facilities available (some major retirement communities have close to 200 courts!) and initial lessons are usually free — it’s also one of the quickest sports to learn from scratch; heck, for those of us with aging neurons the hardest part to learn and keep track of is the scoring, not the basic rules of the game itself. Equipment is not terribly expensive compared to other sports, though be forewarned, an addiction to buying different pickleball paddles may require some sort of family intervention.

Here’s an example of one especially good rally (from the Hawaii Open) that’s been making the rounds lately:
https://www.facebook.com/morgan.evans82/posts/10161763244880352

…and here’s a brief introduction to the game by one of its leading players:

…or, a fun, even briefer, well-known clip from CBS news back in 2010 promoting the sport:

There’s LOTS more of course on Google and YouTube.

If you’re looking for a healthful new activity, no matter your age or previous experience, I don’t believe you can do any better than pickleball. 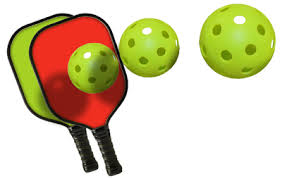