I haven't had a chance to view this myself, but figure a conversation with Andrew Wiles must be good enough to pass along immediately:
https://livestream.com/oxuni/wiles/videos/166535802

Meanwhile, over at MathTango I'm in a bit of a Bah Humbuggery mood today:
https://mathtango.blogspot.com/2017/11/tidings-of.html

Posted by "Shecky Riemann" at 8:07 AM No comments:

To Toss or Not to Toss

The paradox known as Buridan’s Bridge:

Bridge Gatekeeper to the approaching passerby: “If the next sentence you utter is true I will permit you to cross. But if you speak falsely, I will throw you into the water."

Passerby: “You shall throw me into the water.”


Very nice, recent 1-hour summary of modern physics thought (at least one physicist's interpretation) from Sean Carroll (if you've not heard Sean cover this material before this is a great presentation):

Email ThisBlogThis!Share to TwitterShare to FacebookShare to Pinterest
Labels: physics

[...also, a new post over at MathTango today in honor of Thanksgiving approaching.]

The Literature of Ed Witten


This Eric Weinstein tweet from a week ago, and the comments that follow, can entertain you for awhille:
https://twitter.com/EricRWeinstein/status/928296366853328896


From the inimitable John Conway:

Email ThisBlogThis!Share to TwitterShare to FacebookShare to Pinterest
Labels: paradox 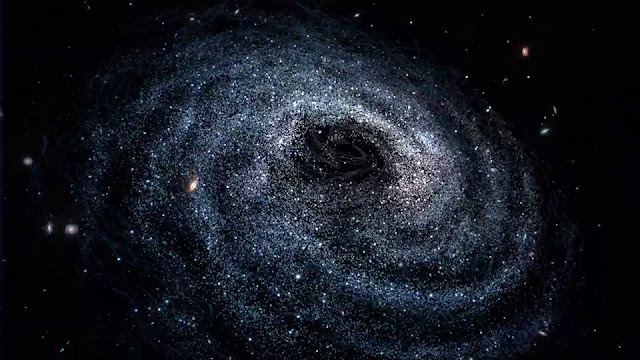 It’s Carl Sagan’s birthday today; an apt time to re-read some of his words and view classic video:

“If you wish to make an apple pie from scratch, you must first invent the universe.”
“Extinction is the rule. Survival is the exception.”
“The nitrogen in our DNA, the calcium in our teeth, the iron in our blood, the carbon in
our apple pies were made in the interiors of collapsing stars. We are made of starstuff.”
“We live in a society exquisitely dependent on science and technology, in which hardly
anyone knows anything about science and technology.”
“The dangers of not thinking clearly are much greater now than ever before. It's not
that there's something new in our way of thinking -- it's that credulous and confused
thinking can be much more lethal in ways it was never before.”
“Science is more than a body of knowledge; it is a way of thinking. I have a foreboding of an America in my children's or grandchildren's time -- when the United States is a service and information economy; when nearly all the manufacturing industries have slipped away to other countries; when awesome technological powers are in the hands of a very few, and no one representing the public interest can even grasp the issues; when the people have lost the ability to set their own agendas or knowledgeably question those in authority; when, clutching our crystals and nervously consulting our horoscopes, our critical faculties in decline, unable to distinguish between what feels good and what's true, we slide, almost without noticing, back into superstition and darkness. The dumbing down of America is most evident in the slow decay of substantive content in the enormously influential media, the 30-second sound bites (now down to 10 seconds or less), the lowest common denominator programming, credulous presentations on pseudoscience and superstition, but especially a kind of celebration of ignorance.”
In memory...

Posted by "Shecky Riemann" at 7:26 AM No comments:

H/T to Dan Goldstein (on Twitter) for pointing out an Interesting plotting of (likely and VERY likely) “streak” probabilities:
http://www.decisionsciencenews.com/2017/10/25/long-need-flip-coin-see-streak/

The author looks mostly at "coin-tossing"-like scenarios, but notes such analysis potentially relates back to other theoretical discussions (such as "hot hand" observations). One can imagine a lot of other ways to play with similar data (and the author presents R code for doing such).

Email ThisBlogThis!Share to TwitterShare to FacebookShare to Pinterest
Labels: probability


Just a quirky episode from the other day... below is a verbatim copy of a tweet that someone posted (I've taken their name off) which I read quickly, thought was kind of fun, and re-tweeted to my followers, giving no more consideration.  If you've not already seen it, take a quick look, and then scroll further below for the little follow-up:

the non-commutativity of custard, according to @DrEugeniaCheng. i'm going to have to try this. so weirddd 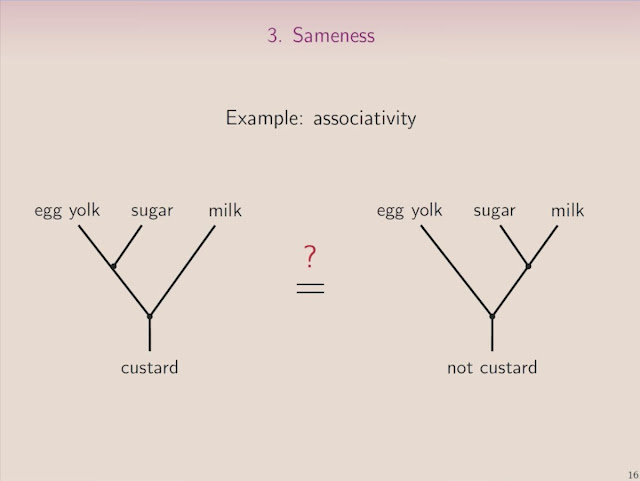 ----------------------------------------------------------
.
.
.
.
.
.
.
.
.
.
.
.
A smidgen interesting I thought, but did you catch the error? (and no, I don't mean the spelling of the word "weird" which was clearly deliberate)... because it slid right by me, despite being rather obvious! And it interests me because of the way language and words function cognitively (psycholinguistics, including speech processing, was my primary focus decades ago).
So, in case, like me, you didn't notice it, the graphic example shown above is one of associativity, and is clearly labelled as such. Yet the poster's description calls it an example of "non-commutativity" (which of course it is NOT).
I simply found interesting the tendency (on my part anyway) to be so drawn to the graphic as to read right through the clear, posted words and not have them accurately register -- you think you know what they say, but the precise meaning may be translated in one's mind quite otherwise, overridden by expectation or the simple speed of processing (part of it too I think is just the mental 'appeal to authority,' resulting from invoking Eugenia Cheng's name, even though she is NOT the one who makes the error). It's almost like an optical illusion that you "see" one way, but is really another -- here, a word takes on an illusory effect.
Anyway, this may be of interest to no one else; I'm just eternally intrigued/concerned by how language plays with our minds (and often in far more deleterious ways!).
p.s.: Brian Hayes was the one who first pointed out the error above to me, and the author of the post apparently heard from several other folks as well; so to many, the mistake no doubt jumped right out.

In any event, I'm in the mood for some custard. :)

10 interesting/skeptical minutes with Eric Weinstein on progress (or lack thereof) in modern physics:

Posted by "Shecky Riemann" at 9:10 AM No comments:


To put it bluntly, the discipline of economics has yet to get over its childish passion for mathematics and for purely theoretical and often highly ideological speculation, at the expense of historical research and collaboration with the other social sciences.
...This obsession with mathematics is an easy way of acquiring the appearance of scientificity without having to answer the far more complex questions posed by the world we live in.

-- Thomas Piketty
Posted by "Shecky Riemann" at 7:00 AM No comments: