I was reading the first of Greg Ross's "Futility Closet" volumes when I came across one of my favorite old puzzles, that was last presented here over 2 years ago. I originally learned of it from Richard Wiseman's blog and again I'll opt for Richard's version of it (most readers here are likely already familiar with it):


"Imagine there is a country with a lot of people. These people do not die, the people consist of monogamous families only, and there is no limit to the maximum amount of children each family can have. With every birth there is a 50% chance it's a boy and a 50% chance it is a girl.  Every family wants to have one son: they get children until they give birth to a son, then they stop having children. This means that every family eventually has one father, one mother, one son and a variable number of daughters.  What percent of the children in that country are male?"

Posted by "Shecky Riemann" at 9:03 AM No comments:

Mathematics and the Real World

"There are voices in the modern mathematical community that bemoan the state of mathematics today. While relishing the intellectual freedom bequeathed by the non-Euclidean revolution, mathematicians of the twentieth century carried their subject farther and farther from a contact with the real world, until their logical constructs became so abstract and arcane as to be unrecognizable by a physicist or engineer. To many, this trend has transformed mathematics into little more than a pointless exercise in chasing tiny symbols across the page. One of the most vocal critics of this trend is mathematics historian Morris Kline, who wrote:


'Having formulated the abstract theories, mathematicians turned away from the original concrete fields and concentrated on the abstract structures. Through the introduction of hundreds of subordinate concepts, the subject has mushroomed into a welter of smaller developments that have little relation to each other or to the original concrete fields.'

"....In response there can be made an intriguing argument that mathematical theories, no matter how seemingly abstract, often have surprising applications to very solid, real world phenomena.  Even the non-Euclidean revolution, the subject that did so much to sever the bond between mathematics and reality, has found its way into modern physics books, for the relativistic theories of today's cosmologies rely heavily on a non-Euclidean model of the universe. Such a reliance was certainly not foreseen by the nineteenth-century mathematicians who investigated the subject for its own sake, yet it now forms a part of applied mathematics necessary for inclusion in the physicist's tool-kit."

Boy, given the comments generated you might have thought that Cathy O'Neil had suggested getting rid of the Confederate Flag or something, when all she did was recommend dropping trigonometry from the high school curriculum:
http://mathbabe.org/2015/06/22/fuck-trigonometry/

If you've missed out on all the brouhaha (or, have fond or not-so-fond memories of trig) check out her post and all the pro-and-con commentary.

Email ThisBlogThis!Share to TwitterShare to FacebookShare to Pinterest
Labels: trigonometry

A Tenet From Taleb


A quick Sunday reflection from Nassim Taleb in "Antifragile":


[...recently finished reading Taleb's 2012 "Antifragile" and enjoyed it even more than his prior "The Black Swan" and "Fooled By Randomness". The last third of the irascible volume is especially good. Recommended.]


The George Csicsery film, "Counting From Infinity," recounting Yitang Zhang's surprising, groundbreaking work on the Twin Prime Conjecture was released earlier this year. If you missed it, the latest trailer for it has been going around recently:


"Gödel's Lost Letter..." offers a take today, "Security Via Surrender," which employs "judo" for the worsening problem of security in our digital world:
https://rjlipton.wordpress.com/2015/06/16/security-via-surrender/

The authors launch their case from this quotation of a martial arts disciple:


"...resisting a more powerful opponent will result in your defeat, whilst adjusting to and evading your opponent’s attack will cause him to lose his balance, his power will be reduced, and you will defeat him. This can apply whatever the relative values of power, thus making it possible for weaker opponents to beat significantly stronger ones."

They forgo the emphasis on "golden key" and secrecy approaches to security in favor of a "knowledge-based authentication" format. But in the end they also admit that "the bad news in all of this is that assuring one’s identity is becoming a battle and there seems to be no simple way to assure victory."

Indeed, can't help but be reminded here of the old Murphy dictum that, "It is impossible to make anything foolproof because fools are so damned ingenious."

Posted by "Shecky Riemann" at 8:56 AM No comments: 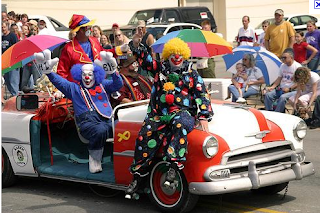 Summery stuff is eating up so much of my time these days, not finding as much opportunity for blogging, thus posts dropping off somewhat ("Sunday reflections" are pre-set for the next 6+ months however, so no change in their regularity!).

...So instead a little politics, 'cuz who don't love pontificating on (or in this case, predicting) politics....

No idea who the Democratic presidential nominee will be (too early and sketchy to deduce much there), but the Republican side has never in my lifetime seen such a c-r-r-razy crop of wannabes.

Around 11 Repubs have officially declared for the race, with closer to 20 considered prospective candidates. Given the nature of the Republican base, the workings (and order) of the primary system, the campaign styles of those running, and the fact that the last two Republican moderate nominees went down to defeat, certain conclusions may shake out:

Only 3 candidates strike me as viable for the Party through the primary process (though I won't list the reasons why): Cruz, Rand Paul, and Paul Ryan (who hasn't declared and may not). Walker, Santorum, perhaps Huckabee, are possibles for the VP slot (which could easily go to someone not in the primary run), but I can't fathom a realistic scenario for anyone else making it to the finish line -- some are too moderate, some too baby-faced (not-ready-for-prime-time), some too inexperienced or weak-on-issues, some simply poor campaigners, and others simply too oddball... and several don't have the 'fire-in-the-belly' required to prevail in such a long, knock-down-drag-out competition. But it should certainly be entertaining along the way (...if only in the same manner that race-car crashes are entertaining).

Anyway, in almost 40 years of trying, I've NEVER called a competitive political primary race accurately this early on, so no need to let me know if everything I say above proves false.

....Maybe by Wednesday back to some math!

Posted by "Shecky Riemann" at 8:17 PM No comments:

"[Grigori] Perelman's aversion to public spectacle and to riches is mystifying to many... I want to say I have complete empathy and admiration for his inner strength and clarity, to be able to know and hold true to himself. Our true needs are deeper -- yet in our modern society most of us reflexively and relentlessly pursue wealth, consumer goods, and admiration. We have learned from Perelman's mathematics. Perhaps we should also pause to reflect on ourselves and learn from Perelman's attitude toward life."

-- Bill Thurston, quoted in Michael Harris's "Mathematics Without Apologies"
Posted by "Shecky Riemann" at 7:00 AM No comments:


Writing for Quanta, Erica Klarreich reports today on a 150-year-old combinatoric problem and what Tim Gowers calls “a bit of an earthquake as far as design theory is concerned”:


"The trouble with integers is that we have examined only the very small ones.  Maybe all the exciting stuff happens at really big numbers, ones we can't even begin to think about in any very definite way.  Our brains have evolved to get us out of the rain, find where the berries are, and keep us from getting killed.  Our brains did not evolve to help us grasp really large numbers or to look at things in a hundred thousand dimensions."

Sort of a side topic today...

Pat Ballew recently ran an interesting entry on Marion Tinsley over at his "This Day In Math" postings... well, interesting to me because I'd not given much thought to the complexities/strategies in the game of "checkers" -- such discussions being more commonplace in relation to chess. But it turns out that even in checkers some players are vastly superior to others, and Tinsley seems to rank as the best of all time! (losing only 7 games in a 45-year career!; he retired from championship play in 1991). He was an intense student of the game, and perhaps not entirely surprisingly, had a PhD. in math focusing on combinatorial analysis.

Reminiscent of IBM's famous chess-playing "Deep Blue" computer, there was similarly an expert checkers computer, named "Chinook" (which accounted for 2 of Tinsley's 7 lifetime losses). Interestingly, both computers were developed over a similar span of time, though Chinook (developed by Canadians) was successful at defeating a human champion sooner than Deep Blue accomplished the feat in chess.
Eventually those who programmed Chinook were able to prove they had "solved" the game of checkers (and its "500 billion billion checkers positions"), meaning their Chinook algorithm could be played to a draw, but could not be defeated.
You can actually compete against Chinook on the Web here:
https://webdocs.cs.ualberta.ca/~chinook/play/

...or you can read about Tinsley at Wikipedia:
http://en.wikipedia.org/wiki/Marion_Tinsley

or from this profile:
http://www.wylliedraughts.com/Tinsley.htm 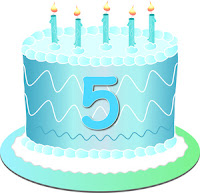 Today is the 5-year birthday of Math-Frolic!... that's 1800+ days of unmitigated fun for me doing a blog that I didn't expect to last 9 months. It's been a sort-of return-to-childhood... as I believe math-people are eternally children! ;-)
So today just a huge THANKS to all who've participated, shared, emailed, inspired, or been encouraging along the way, or simply been quiet regular readers on the sidelines... (just don't expect 5 MORE years of this!)

In any event, xkcd nailed it almost 7 years ago:

Now excuse me while I go stuff my face with cake... or pi.