As a “bonus” link on last Friday’s potpourri I gave Sean Carroll’s recent Gifford Lectures In Natural Theology. They generally last about an hour with a Q-and-A period following. Just to further entice you, I’ll post the 2nd talk ("The Stuff of Which We Are Made") below:

Posted by "Shecky Riemann" at 8:17 AM No comments:


"Perhaps the most surprising thing about mathematics is that it is so surprising. The rules which we make up at the beginning seem ordinary and inevitable, but it is impossible to foresee their consequences. These have only been found out by long study, extending over many centuries. Much of our knowledge is due to a comparatively few great mathematicians such as Newton, Euler, Gauss, or Riemann; few careers can have been more satisfying than theirs. They have contributed something to human thought even more lasting than great literature, since it is independent of language."


[between all the Holiday and political hoopla, blogposts here might be a little scarce the next few weeks, but I do have a new year-end book wrap over at MathTango today.]

“Gödel didn’t believe that truth would elude us. He proved that it would. He didn’t invent a myth to conform to his prejudice of the world — at least not when it came to mathematics. He discovered his theorem as surely as if it was a rock he had dug up from the ground. He could pass it around the table and it would be as real as that rock. If anyone cared to, they could dig it up where he buried it and find it just the same. Look for it and you’ll find it where he said it is, just off center from where you’re staring. There are faint stars in the night sky that you can see, but only if you look to the side of where they shine. They burn too weakly or are too far away to be seen directly, even if you stare. But you can see them out of the corner of your eye because the cells on the periphery of your retina are more sensitive to light. Maybe truth is just like that. You can see it, but only out of the corner of your eye.”

— Janna Levin (from “A Madman Dreams of Turing Machines”)


I don't have a lot of potpourri picks for you this week (over at MathTango), so I'll add this long, older pdf that seems timely, on the well-known story of Kurt Gödel and a possible loophole in Article V (perhaps) of the U.S. Constitution (a surprisingly interesting read, coming from a law review journal!):
http://tinyurl.com/zs3tvb3

Posted by "Shecky Riemann" at 7:10 AM No comments:

Email ThisBlogThis!Share to TwitterShare to FacebookShare to Pinterest
Labels: Godel

Either Jim Propp is Santa Claus or Just a Great Blogger

I wrote shortly ago that I expected Jim Propp to have an interesting take on self-referential sentences sometime this month, and that exceedingly-rich post is now up, full of fascinating ideas (...I’ll admit ‘self-reference’ isn’t everyone’s cup-of-tea of a topic, but for those it is, Jim’s thoughts and many great links and endnotes are must-reading, including Jim’s own self-referential ‘test,’ if you’re in the mood for a real mind-twister):
https://mathenchant.wordpress.com/2016/11/17/breaking-logic-with-self-referential-sentences/

[One, of many, small interesting sidelights for me was discovering that Janna Levin, better known for her physics writing, had written a 2007 novel intertwining the lives of Kurt Gödel and Alan Turing.
-- p.s. here's a link to Dr. Levin's appearance at "The Moth," which Brainpickings' Maria Popova once called "the greatest story ever told on The Moth").]

Posted by "Shecky Riemann" at 7:10 AM No comments:


Hopefully, by now I don’t even need to link to Ben Orlin’s posts, because you’re already reading him anyway. If you’re not reading Ben you should be locked up! He has a bigly (almost yuuuge) post today on the secondary math curriculum with plenty of neat ideas for consideration and discussion. They are very good, BELIEVE ME.**
This has already been, for awhile, a topic among math educators, who ought not miss Ben’s take on how to drain the math swamp and re-build it anew:
https://mathwithbaddrawings.com/2016/11/16/other-ways-to-carve-up-the-math-curriculum/

** I’m trying to get comfortable with the current vernacular

"I did my best, it wasn’t much
I couldn’t feel, so I tried to touch
I’ve told the truth, I didn’t come to fool you
And even though
It all went wrong
I’ll stand before the Lord of Song
With nothing on my tongue but Hallelujah"
— Leonard Cohen

Something appropriate I s’pose that a free-spirit like Leonard Cohen should die in a year, and indeed a week, when freedom itself seems to be expiring....

Posted by "Shecky Riemann" at 4:56 AM No comments:

Here's another one of those simple problems (I’ve cited before) where language gets in the way!….

[these dozen examples offer some good ones for primary/secondary students, and youngsters are especially susceptible to the following 'broken water heater' fallacy.]

#6 he calls “The Broken Water Heater Problem”… I’ve seen it in many forms, and there are a zillion ways to set it up. Hickey posts it as follows (quoting verbatim):
———————————————————
Last week, the heat in my apartment crapped out because my water heater broke.
I went to a person, showed him the water heater, he used a bunch of spare parts and then fixed it. I paid him for the repairs.
Is this person more likely:
An accountant?
…or
An accountant and a plumber?
———————————————————
Even if you’re not familiar with these type-questions, hopefully upon a moment of logical thought the reader recognizes the answer should be that the person is “an accountant.”
The problem is, often people DON'T really give a moment of ‘logical thought,’ instead jumping to the conclusion that it's more likely (more probable) that the individual must have plumbing skills, and thus must be “an accountant and a plumber.” But of course ANYone who is ‘an accountant and a plumber’ is automatically ‘an accountant’ — in Venn diagram terms, the circle of accountants includes wholly within it the circle of ‘accountants and plumbers.’
Again, I just like this because it once more demonstrates how easily words and language often short-circuit, rather than aid, our logic. [In fact, I dare say our latest election is clearly another example of mere visceral words/language overriding reason.]

A Little Backstory… the Erdos/Tao photo 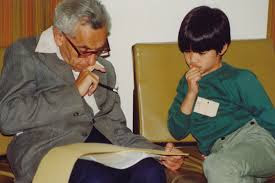 A substitute ‘Sunday reflection’ today, because of my experience with a tweet last evening….

I’ve always loved the above photo (brings me a smile everytime) of a 10-yr.-old Terry Tao with Paul Erdös, which I dropped into a tweet last night — the look on the faces, the synchronous postures, the concentration, the shared passion…  It originally showed up on the ’Net in 2013 courtesy of Terry himself, and went somewhat viral at the time within math circles:
https://plus.google.com/u/0/+TerenceTao27/posts/fiZbgKv4Yew
(...and a h/t to Patrick Honner who was the first to bring it to my own awareness, back then)

Is that not great! I thought it was iconic by now and viewed by everyone multiple times. But a few folks (responding to the tweet) apparently were not familiar with it, and while usually recognizing Erdös, were unsure of the youngster involved. So just to clear any confusion, am posting the little bit of history that I know (thanks again to Dr. Tao for sharing it originally -- apparently the pic comes from the University of Adelaide in Australia at an awards ceremony of the Australian Mathematics Competition,1985).
As some responders have noted, two people, bridging a large generation gap, one originally Hungarian, one originally Australian, who both came to America, and in different manners contributed so much to our joy of mathematics, and continue to delight us, in both death and life.

p.s... among Erdös' many noted linguistic idiosyncracies, he referred to young children as "epsilons," and as one of the commenters to Terry's original post says, he had finally found an interesting "epsilon." ;-)

A Little Nostalgia... For Your Weekend Viewing


Twilight Zone - The Monsters Are Due on Maple Street from Kevin on Vimeo.

Peter Wason and His Famous Test


Some interesting overview and history of the 'deceptively easy' Wason Selection Task  in today's Nautilus:
http://nautil.us/blog/the-simple-logical-puzzle-that-shows-how-illogical-we-are

Perhaps this test and its implications, by a man who treated "reasoning as an enigma" is even extra pertinent in a week that people are engaged in especially important political decision-making! From his 2003 obituary: “His aim was to reveal a surprising phenomenon—to show that thinking was not what psychologists including himself had taken it to be.”

[If by any chance you're not familiar with the task, the article contains an interactive video you can play with.  And it's a fun test to run by students and adults at various levels.]

Also, as with many puzzles I enjoy, language or words, in addition to strict abstract reasoning, potentially come into play here, as the article indicates.

[ADDENDUM:  just realized, this article is a RE-run of a piece Nautilus ran in May 2015]

Posted by "Shecky Riemann" at 7:17 AM No comments: