A Cook Book of Paradoxes

A review of “Sleight of Mind” by Matt Cook (due out in late March):

Paradoxes, I think, say a lot about the workings of the human mind and human logic… they’ve always fascinated me, and they come in a myriad of forms.

Oddly, author Matt Cook is listed as an economist and a magician… I say oddly only because most books on paradoxes that I’m familiar with are written by either mathematicians or philosophers. Yet Matt has put together one of the overall best and broadest compendiums I’ve seen of wonderful paradoxes (divided into 13 categories), ranging across mathematics/probability, philosophy, and logic, before ending with 3 chapters on physics-related paradoxes (by contributing authors) that aren’t usually included in such math-related compendiums. And then to conclude, Matt recruits Grant Sanderson (of 3blue1brown YouTube fame) to add a final essay on whether mathematics is invented or discovered. I didn’t honestly feel this essay (on a well-worn issue) fit that well in the overall volume, but still always interesting to hear Sanderson’s take on any topic.

The volume covers (according to its own promotion) 75+ paradoxes, including most all the best-known and studied ones that a reader would expect, but also with some that most readers may find new to them. I did manage to think of a couple that I’ve covered here on the blog previously which I didn't find in the book, but which I think would make fine additions (the second below is a probability paradox, and the first is what Cook would perhaps classify as an “operations” paradox):

The format throughout Cook's book is to state/describe the paradox, and then give two (or more) possible ways of, or approaches to, explaining it, followed by a discussion of why one explanation is true and the other(s) is/are not. Some of these discussions I think are a bit too short, not quite always convincing (needing a bit more fleshing out), but in most cases the discussion seems about right: not too brief, but not too deep into the weeds either. Cook’s writing is sometimes rather pedantic, and occasionally there is some serious math involved, so even though the paradoxes are usually inherently interesting, the volume is more appropriate to a college level student than a lower level (though, again, the majority of the paradoxes could be understood by young students -- and I've long been a believer that paradoxes offer a great example for young people of the imprecision/uncertainty of human logic and analytical thinking; in short, it would be fun and instructive to share many parts of the volume with primary/secondary students).

I am particularly interested in “self-reference,” and appropriately (to me) by far the longest chapter in Cook’s book is on self-reference paradoxes. Other favorite topics for this reader are supertasks, probability, induction, and geometry, but your own personal preferences will guide which of the 14 chapters you find most interesting.

There are by now several good compendiums and discussions of paradoxes available; the scope and readability of this volume makes it a great addition to the subject-area. I recommend it. …and, that sentence is not false. 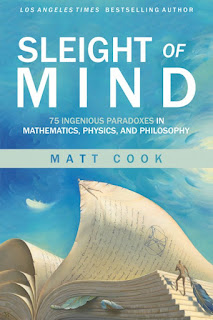 ==> will just note that I'm reviewing a review copy of the volume that was sent to me back in January December and am assuming there will be no major revisions in the final March-released edition.

The Intersection of Math and ASMR


For variety, I've been sprinkling in ASMR video posts on the blog for awhile and, out of curiosity, decided to google "ASMR +Math," where I found a little more than I expected, including this:

Email ThisBlogThis!Share to TwitterShare to FacebookShare to Pinterest
Labels: asmr 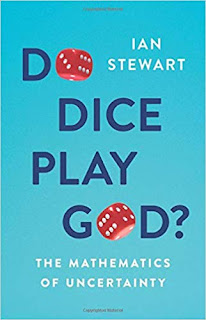 I’ve read 4 popular math books already this year and they’ve all been great… though all very different. What a quick start to the new year!

Ian Stewart volumes are consistently good, but with that said there’s also a certain “sameness” to his prolific work — popular topics treated with clarity and wisdom, but not necessarily terribly new, inspiring, or original; just clear basic elucidation. So I was hesitant to read his latest volume (out in 2019, but more readily available in the U.S. now) with a title, “Do Dice Play God?” (a play off an Einstein quote, and also off an earlier book he wrote), which I found a little too ‘cutesy.’ and not all that informative of the content.

However, I not only thoroughly enjoyed this volume, but consider it one of his best, and most important yet… not because it’s any more original or otherwise outstanding than Stewart's other writing, but because he is covering some of the most currently important topics for the lay public: statistics, probability, uncertainty (and how they relate to critical thinking) — indeed this is likely the best volume I’ve seen for presenting these crucial subjects to a general audience, and Stewart isn’t even a statistician by profession (and professional statisticians may find technical flaws in his text). The range of topics and examples, even though well-worn, is great and lucidly presented. I think many will be surprised at just how good (and relevant) it is! Not sure, but I suspect this Stewart effort may have been partly overshadowed in 2019 by the release of David Spiegelhalter's also-excellent (and somewhat more technical) volume, "The Art of Statistics."

If you’re already ensconced in the nuances and debates involving statistics these days you won’t find much new or original in this volume, but for the mass public this is a fantastic introduction (and there are many good ones) to these important concerns — Stewart offers just enough detail without diving too deep into the weeds to leave readers behind (although admittedly, some numeracy is required). Moreover, at various points he also moves the discussion away from abstraction and theory, to stress how prediction, probability, and uncertainty are especially pertinent to our daily lives and current societal issues.

One interesting sidenote to me: toward the end of the book Stewart ambles off into a number of more complex theoretical physics topics, and this is a trend I’ve been seeing in a number of math books… focusing more-than-usual, at some point, on physics. Perhaps just my imagination, but it seems as if the linkages between math and physics (always strong of course) are becoming even more central to both fields as time goes on. Physics has always recognized the foundational basis of mathematics, but more and more the linkages between the two fields seem to be feeding back-and-forth off of one another in pursuit of new insights (just my impression).

...I'll soon be posting a review of Matt Cook's highly-entertaining "Sleight of Mind" (with an end-of-March publication date), but the next volume in my reading queue looks to be another fascinating 2019 read, a biography of James Simon, "The Man Who Solved the Market." 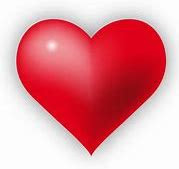 For awhile I had a tradition, on Valentine's Day, of linking to Jennifer Ouellette's "Love among the equations" fun tribute to her husband, physicist Sean Carroll. I haven't done that for awhile, so for anybody who's never seen it, seems like a timely jaunt down memory lane:
https://blogs.scientificamerican.com/cocktail-party-physics/love-among-the-equations/

Meanwhile, Rob Eastaway yesterday tweeted out this chart of "popular" birthdays, noting that you can also deduce other 'popular' days (of a sort) by subtracting 9 months from the chart results:
https://twitter.com/robeastaway/status/1227896654214418433

...and lastly, just for today, something we can all relate to, the mating dances of a couple of our avian friends: 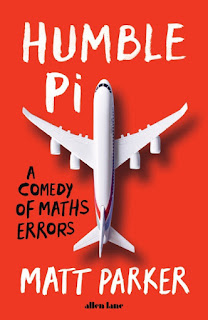 OK, don’t waste your time reading Matt Parker’s latest book, "Humble Pi," from page 1 to page 314… complete waste of friggin’ effort; reads like gibberish and a crazy travesty of publishing. Who knows what kind of psilocybin Matt was on when he wrote the dang thing….

INSTEAD… read the volume from page 314 to page 1 and you will be thoroughly entertained by the range of uniquely-strewn-together topics Matt combines in this rollicking volume peppered with his usual droll-to-wacky humor… one can easily imagine Parker at his writing tablet, smirking as he composes the many lines that will beget a chortle from unsuspecting readers (unsuspecting that there be humor in math).

The book is full of gems… math gems, humor gems, and just thought gems, scattered throughout an unpredictable mix of math nuances and perversities, which will leave you earnestly hoping that Parker has agreed to donate his fertile brain to science (preferably after he passes). In fact, I’m no longer sure who makes me laugh more, Ben Orlin, Matt Parker, Ricky Gervais, or the Evangelicals who vote for Donald Trump while labeling themselves moral or patriotic (LOL, OMG).

“Humble Pi” was already a big bestseller across the pond in Britain last year (perhaps explaining why the publisher actually sent it to America, lo-and-behold, absent-mindedly keeping the same title), so now it's time for Americans to show what they're made of, and buy it! — though admittedly, my Homeland, especially under the Trump Regime, is not characterized by a fondness for math/science matters (except, of course, as it may apply to money-laundering and tax evasion, two topics Matt can include when he does the sequel, “Humble Fourth Reich”).
Indeed I’m always amazed when I venture into a Barnes and Noble and see some mathy volume on a front table display right alongside a John Grisham work or the latest 'how-to-live-to-be-200' effort (or some such) from Dr. Oz. In any event, here at the blog, I’m speaking to a choir of math enthusiasts who will hopefully prefer this volume over the latest schlock from Dan Brown. For all remaining Americans who aren't under the spell of Q-Anon, and who prefer fun to fascism, this is a fab read.

Computers, engineering, numbers, money, statistics, randomness, time, probability, algorithms, and more…. it’s all here for your delectation… and it ain’t always pretty… but then, that's sort of Matt’s point.

Posted by "Shecky Riemann" at 8:05 AM No comments:


As Matt Parker notes in his latest book, "If this Thomson Reuters ad is a Venn diagram, it's surprisingly honest": 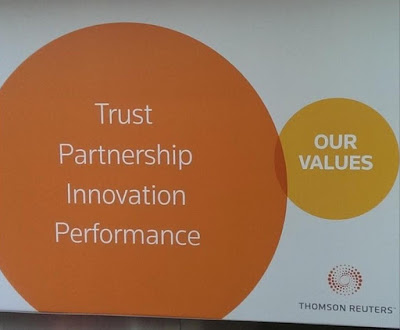 Posted by "Shecky Riemann" at 6:25 PM No comments:

Email ThisBlogThis!Share to TwitterShare to FacebookShare to Pinterest
Labels: humor

Another month, another ASMR video (...and who doesn't need a little ASMR during a week like this one):
“Dmitri” is one of the most popular and long-standing ASMR ‘artists’ out there, who began by largely posting massage videos (but has moved on to other modalities). This is a compilation video of tapotement or percussion massage segments drawn from some of his early videos: