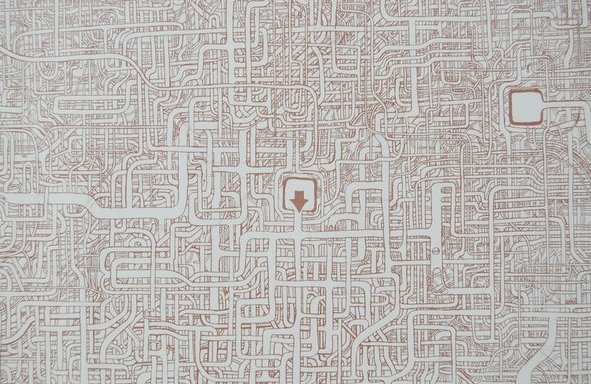 Every now and then the maze that the above slice comes from makes the rounds of the internet. Cliff Pickover put it out there again recently on Twitter. It was created decades ago by a Japanese janitor over a 7-year period (but only discovered ~5 years ago), and it can actually be purchased these days, probably more as a work of art than an actual puzzle maze (anyway, I’ve never heard of anyone solving it):
https://www.huffingtonpost.com/2014/01/15/janitor-maze_n_4602416.html

If you prefer your mazes a bit tamer, here’s another one from Cliff’s site:
http://sprott.physics.wisc.edu/pickover/pc/einsteinmaze.html

And finally, a h/t to @MathematicsProf on Twitter who recently linked to this kinda cool/fun free maze generator, for creating your own:
http://www.mazegenerator.net/Default.aspx


On Twitter the other day, Eugenia Cheng mentions this as one of her favorite “math jokes” (I’ve never thought of it as a joke per se, but do agree it is a favorite quickie logic puzzle):

Richard Feynman once somewhat famously said, “Philosophy of science is about as useful to scientists as ornithology is to birds.” It’s not an uncommon sentiment among scientists. Nonetheless I do find some aspects of analytical philosophy and philosophy of science interesting, and a recent volume snagged my attention...
After all, how could anyone resist a book with the title “Exact Thinking In Demented Times”… yeah, it sounds like a volume about our current spiralling-to-fascism era, but is actually a historical account by Karl Sigmund (a math professor) of philosophy’s 20th century “Vienna Circle”. The Preface is written by Douglas Hofstadter, usually a significant endorsement in itself, though it turns out Hofstadter played a major role translating this volume from Sigmund’s original German, so has a stake in the book.
But I am enjoying the volume thus far (less than 100 pages in), and haven’t even yet reached any discussion of the ideas and interactions of members of the famed Vienna Circle, which is what I am most looking forward to.
Anyway, to pique your interest I’ll pass along this bit that entertained me, where Sigmund recounts Ludwig Boltzmann presenting an address to the Philosophical Society with the “bland title On a Thesis of Schopenhauer,” and then opening his talk...

“with the offhand comment that he had originally intended to use a somewhat more provocative title, to wit: Demonstration That Schopenhauer Is an Insipid and Ignorant Philosophaster Who, by Ceaselessly Propagating Hollow Twaddle, Spreads Nonsense Far and Wide and Forever Perverts Brains from Top to Bottom.  Amusingly enough, Boltzmann was actually giving Schopenhauer some of his own medicine, for none other than Schopenhauer had used exactly these same phrases to rail against the arcane writings of George Wilhelm Friedrich Hegel. Not that Boltzmann cared one bit for Hegel either.”

(I’ll assume this is just as humorous in the original German…;)

I may say more about the 400-page volume in the future.
(An MAA review of the volume is HERE.)
[ADDENDUM:  I've now overviewed the book HERE.] 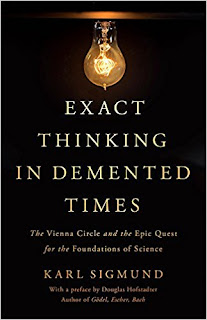 Lastly, speaking of demented times, and in honor of today’s young people (acting when grown-ups won’t!), some timely old cinema from the “I’m-a-human-being-goddamn-it-and-my-life-has-value” Dept.:

I grew up in the 1950s when our biggest fear in America was of a nuclear bomb blast -- though in reality, as a child, I felt few fears, and virtually none on a daily basis.

I can’t even imagine sitting at a schoolroom desk, worried about being shot in the head (nor being the parent who must drop their child off at the school front door) — the daily reality of today’s students/parents — far scarier than my generation ever felt about the nuisance of a measly atomic bomb.


From Davis and Hersh (in "The Mathematical Experience"):


"To the philosopher, there is all the difference in the world between a proof that depends on the reliability of a machine and a proof that depends only on human reason. To the mathematician, the fallibility of reason is such a familiar fact of life that he welcomes the computer as a more reliable calculator than he himself can hope to be."

How can a nation, that so utterly fails safeguarding its children and youth, succeed into the future.…

Posted by "Shecky Riemann" at 3:20 PM No comments:

How Do I Love Thee…

Let me count the ways, employing the real numbers of aleph-one.…
(this might take awhile)

Jennifer Ouellette’s classic piece I used to link to every year, but haven’t for awhile (and ought not be missed):
https://blogs.scientificamerican.com/cocktail-party-physics/love-among-the-equations/

…and lastly this from someone who’s gone completely ridiculously bonkers overboard:
http://cdn.notonthehighstreet.com/system/product_images/images/001/458/342/original_mathematics-formula-valentine-s-day-card.jpg

Posted by "Shecky Riemann" at 7:58 AM No comments:

Email ThisBlogThis!Share to TwitterShare to FacebookShare to Pinterest
Labels: humor


From Ed Frenkel's "Love and Math":


“Mathematical knowledge is unlike any other knowledge. While our perception of the physical world can always be distorted, our perception of mathematical truths can’t be. They are objective, persistent, necessary truths. A mathematical formula or theorem means the same thing to anyone anywhere – no matter what gender, religion, or skin color; it will mean the same thing to anyone a thousand years from now. And what’s also amazing is that we own all of them. No one can patent a mathematical formula, it’s ours to share. There is nothing in this world that is so deep and exquisite and yet so readily available to all. That such a reservoir of knowledge really exists is nearly unbelievable. It’s too precious to be given away to the 'initiated few.' It belongs to all of us.”

Some real miscellany for today!:

1)  start with some actual mathy-ness:
The continuum hypothesis involves a well-known conundrum (considered undecidable without new set theory) among mathematicians over whether any infinite sets exist between aleph-zero and aleph-one. But I don't recall hearing any arguments over whether there could be infinite sets between any other alephs (say, aleph-three and aleph-four) — of course these higher sets are all power sets, but I can’t recall ever reading any “proof” that there can be no set in-between… I assume this is a long-settled simple question, but am not sure what the simple answer is! or is it somehow axiomatic with no real proof... or does it not even much matter since there's already an infinity of infinite sets???

ADDENDUM:  I've now posed this question to a local retired math professor/number-theorist and he didn't know the answer, so at least I feel better at this point that it may not be a simple or dumb question to ask! (but have not heard from anyone else)

2)  Next, no math, just a question that I asked on Twitter but got little response to, so will try here:
Google search has given me sporadically crappy results for several weeks (sometimes NO results, and sometimes results having no or little bearing on what I’m searching for), so I’ve switched over to Bing for now, but just wondering what search engines other math-types are happy with (it’s not a privacy issue or any other concern, strictly quality/relevance of results)? And are others experiencing issues with Google search — seems like some real glitch involved?

3)  Finally, just a note… Two of the the greatest television shows ever when I was younger were Carl Sagan’s “Cosmos” and Jacob Bronowski’s “The Ascent of Man.” I’ve sometimes used Bronowski quotes and videos here on the blog, and just as “Cosmos” was re-done a few years back I feel like “Ascent of Man” should be re-run or re-done for each new generation.
Anyway, I stumbled across Bronowski on the Web a few days back and suddenly realized that he was trained as a mathematician (somehow I had him pegged in my mind as a physical scientist). Also didn’t realize he had died at the age of 66 (much younger than I thought) just one year after “Ascent…” was completed in 1973. Additionally discovered that “Ascent…” was originally commissioned by Sir David Attenborough. Just all interesting tidbits to me… and here is Dr. Bronowski voicing some of his thoughts about mathematics:

"Mathematics is the music of reason"


“Mathematics is the music of reason. To do mathematics is to engage in an act of discovery and conjecture, intuition and inspiration; to be in a state of confusion—not because it makes no sense to you, but because you gave it sense and you still don't understand what your creation is up to; to have a breakthrough idea; to be frustrated as an artist; to be awed and overwhelmed by an almost painful beauty; to be alive, damn it.”


Today, am just re-citing 2 of my very favorite long, rich blogposts that I’ve previously linked to, one from Lior Pachter a couple years back and an even older one from Tim Gowers. New people/teachers are constantly entering the math blogosphere, so for any who may have missed these earlier on I think they bear re-posting/re-reading: