A couple of important but different takes on math education from the week:

2)  ...and, calculus vs. statistics/data science -- a timely, ongoing debate in math secondary education:

Posted by "Shecky Riemann" at 8:29 PM No comments:

Email ThisBlogThis!Share to TwitterShare to FacebookShare to Pinterest
Labels: education


“The true spirit of delight, the exaltation, the sense of being more than man, which is the touchstone of the highest excellence, is to be found in mathematics as surely as in poetry.”
— Bertrand Russell

First a clarification:
Recently I linked to this excerpt that I was excited to see from a new Jim Holt book (“When Einstein Walked with Gödel”) and assumed the book was entirely about Einstein, Gödel, Cantor, infinity, and the like:
https://lithub.com/on-david-foster-wallace-georg-cantor-and-infinity/

However I now have the book in-hand, fresh off the press, and it is even more sumptuous than that, as it is a compendium of Holt essays over a couple of decades, covering a much wider range of fascinating topics, of which the excerpt was just one. Leafing through it I can already tell it will be one of my favorite volumes of the year… and this year looks to have more wonderful math-related books than I'd anticipated.

We just got the news yesterday that Ben Orlin will be out in September with “Math With Bad Drawings” (the book)… I mean how freakin' coooool is THAT! Just a few days ago I tweeted that Ben’s mind was either a marvel… or, a mutation ;) I’m still not sure which it is, but CONGRATULATIONS to him either way, and to the publisher that snagged him! Oh, and he'll be doing a book tour (so catch him before he retires to some paradise island and lives off book royalties henceforth).

Also due in September, is Eugenia Cheng’s latest (and timely) offering “The Art of Logic in an Illogical World.”  Now come on you math writers could you please get your act together and space these volumes out a little better! Actually, I have an uncorrected review copy of the Cheng's book and will be reporting on it shortly. [...Now HERE.]

Right around the corner in June, Sabine Hossenfelder’s “Lost In Math” is due to hit stores, for those with a penchant for the overlap of math and physics.

Due in August is Deborah Mayo’s “Statistical Inference as Severe Testing: How to Get Beyond the Statistics Wars” which may well be more geared to professional statisticians than to a general audience (not sure).

I’ll reiterate a thumb’s-up for David Acheson’s slim little introduction/primer (that I mentioned briefly before) on elements of calculus, “The Calculus Story,” especially for any just starting or refreshing their journey into calculus.

Also, on my desk right now is Nassim Taleb’s latest, “Skin In the Game,” a hugely fun, entertaining read (less than 100 pages in), but more philosophy (or even social anthropology) than math thus far (there is math in the brief Appendix), so I’ll blurb about it at some point, though it might not re-appear on my year-end list.

Have a few other non-math books in my queue at the moment, but the only one I’ll mention is Robert Wright’s “Why Buddhism Is True,” newly out in paperback (a poor title methinks, but an engaging treatment of the subject for those so interested).

A couple of other mathy books I’d like to get to before year’s end, but may not at this rate, are Vicky Neale’s “Closing the Gap,” and Hans Rosling’s “Factfulness.”

Have a feeling that come December it will be harder-than-usual to pick a favorite volume of the year.

“Mathematics has the completely false reputation of yielding infallible conclusions. Its infallibility is nothing but identity. Two times two is not four, but it is just two times two, and that is what we call four for short. But four is nothing new at all. And thus it goes on and on in its conclusions, except that in the higher formulas the identity fades out of sight.”
— Johann Wolfgang von Goethe

New From Jim Holt on Infinity and More

One of my favorite past posts to write was a little tribute to David Foster Wallace for his volume on infinity, “Everything and More”:
https://math-frolic.blogspot.com/2015/02/infinity-and-angst-david-foster-wallace.html

Jim Holt now has a new book, “When Einstein Walked With Gödel”, excerpted here with this wonderful passage on Wallace and more:
https://lithub.com/on-david-foster-wallace-georg-cantor-and-infinity/ 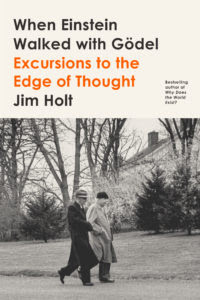 Posted by "Shecky Riemann" at 7:26 AM No comments:

Here’s a “lateral thinking puzzle” I kind of liked from this week’s Futility Closet podcast, based upon a prior Guardian news piece (I’ve re-worded and adapted):


.Answer:  the professor estimates that as a result of increased fears of airplane travel in the year following the 9/11 terrorism, air travel decreased by between 12 and 20%, while long distance automobile road trips increased significantly.  Statistically, car travel is far less safe than plane travel, and would result in a higher number of deaths than would be the case if those same individuals had opted instead to fly.

Stan the Man... and Mathematician


Yesterday marked the 34th anniversary of the death of Stanislaw Ulam. Most math fans know of him via his Ulam spiral and perhaps some other contributions, but given the wide range and scope of his efforts in mathematics I’m surprised he isn’t an even better known figure to many folks.
His almost 30-year-old autobiography,“Adventures of a Mathematician” is here:
https://amzn.to/2Icv4vi

…or you can also read sections of it online here:
http://tinyurl.com/yac5x3ar

And I highly encourage everyone to read this wonderful older piece by his friend and colleague Gian-Carlo Rota (lending a much richer profile of Ulam than does his Wikipedia piece):

To pique your interest it starts off thusly:

“One morning in 1946 in Los Angeles, Stan Ulam, a newly appointed professor at the University of Southern California, awoke to find himself unable to speak. A few hours later he underwent an emergency operation. His skull was sawed open and his brain tissue sprayed with newly discovered antibiotics. The diagnosis — encephalitis, an inflammation of the brain. After a short convalescence he managed to recover, apparently unscathed.
In time, however, some changes in his personality became obvious to those who knew him. Paul Stein, one of his collaborators at Los Alamos, remarked that, while before his operation Stan had been a meticulous dresser, a dandy of sorts, afterwards he became visibly careless in the details of his attire, even though his clothing was still expensively chosen.
When I met him, many years after the event, I could not help noticing that his trains of thought were unusual, even for a mathematician. In conversation he was livelier and wittier than anyone I had ever met, and his ideas, which he spouted out at odd intervals, were fascinating beyond anything I have witnessed before or since. However, he seemed to studiously avoid going into any details. He would dwell on a given subject no longer than a few minutes, then impatiently move on to something entirely unrelated.”

And elsewhere, Rota wrote of his friend, “Ulam's mind is a repository of thousands of stories, tales, jokes, epigrams, remarks, puzzles, tongue-twisters, footnotes, conclusions, slogans, formulas, diagrams, quotations, limericks, summaries, quips, epitaphs, and headlines. In the course of a normal conversation he simply pulls out of his mind the fifty-odd relevant items, and presents them in linear succession. A second-order memory prevents him from repeating himself too often before the same public.”

Just one more in the panoply of fascinating and brilliant mathematical characters....

“The nature of the peculiar certainty of mathematics is now clear: A mathematical theorem is certain relatively to the set of postulates from which it is derived; i.e., it is necessarily true if those postulates are true; and this is so because the theorem, if rigorously proved, simply re-asserts part of what has been stipulated in the postulates… A mathematical truth is irrefutably certain just because it is devoid of factual, or empirical content.”

The Teachers In Our Lives


A 'change in venue' today...  In place of the usual "Sunday Reflection" normally found here, I'll refer readers instead to a longer, new post now up at MathTango this morning. Enjoy...

a)  If you like your math with a little physics and a little history, this recent piece is Evelyn Lamb's first for Symmetry Magazine:
https://www.symmetrymagazine.org/article/the-coevolution-of-physics-and-math

...and Dr. Lamb's latest "TinyLetter" is newly-out, if you need to catch up with her doings for the month of April:
https://tinyletter.com/evelynjlamb/letters/stuff-evelyn-wants-you-to-read-16


b)  A somewhat quirky blog from Mark Dominus that’s been around for quite awhile, but that I only recently stumbled upon (he touches on a number of subjects, but this link focuses on his math posts that many may find of interest):
https://blog.plover.com/math/

Posted by "Shecky Riemann" at 1:48 PM No comments: