“…the ultimate success will never be ours [scientists]. Nowhere in the castle of science is there a final exit to absolute truth.
“This seems terribly depressing. But, paradoxically, to understand Gödel’s proof is to find a sort of liberation. For many logic students, the final breakthrough to full understanding of the Incompleteness Theorem is practically a conversion experience. This is partly a by-product of the potent mystique Gödel’s name carries. But, more profoundly, to understand the essentially labyrinthine nature of the castle is, somehow, to be free of it.”

It’s a somewhat slow week at Math-Frolic (am too busy with other things), so will just run this revised quiz I put on Twitter not long ago:

Found the below photograph in a book recently. Is it a young: 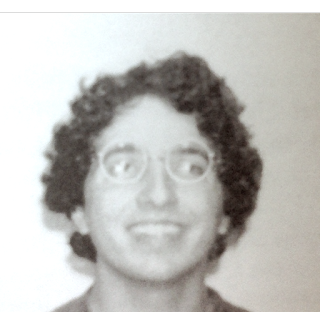 p.s…. Google, you’re drunk!! When I initially plopped the above picture into Google image search to see what would come up, it said the best guess was “afro” and took me to this page:
http://tinyurl.com/y768nojc

[this is a company making algorithms for driverless cars mind you; oy…]  ;)

The Pleasure of Proof

“My friend G.H. Hardy, who was a professor of pure mathematics… told me once that if he could find proof that I was going to die in five minutes he would of course be sorry to lose me, but this sorrow would be quite outweighed by pleasure in the proof. I entirely sympathised with him and was not at all offended.”

Physicists often remark that no one actually understands quantum mechanics (and those who say they do are lying), but they use it because it consistently works.
Similarly, polymath John von Neumann once famously said that , “…in mathematics you don’t understand things, you just get used to them.”
And in a similar vein David Wells quotes applied mathematician, Oliver Heaviside, thusly:

“The prevalent idea of mathematical works is that you must understand the reason why first, before you proceed to practise.  That is fudge and fiddlesticks. I know mathematical processes that I have used with success for a very long time, of which neither I nor anyone else understands the scholastic logic. I have grown into them, and so understood them that way.”

It seems to me that a lot of the emphasis these days from professional mathematicians, as well as in Common Core’s approach, is for students to develop a much deeper understanding of mathematical logic and connections first (and foremost), and for rote processes to follow thereafter. A change in perspective or outlook perhaps??? (or maybe math education has simply always been a mixture of both, in a sort of chicken-and-egg fashion).

Anyway, I’ve spent this week offering up a few snippets (with one more coming Sunday) from Wells’ wonderful 20-year-old volume “The Penguin Book of Curious and Interesting Mathematics.” It is one of the most delightful math reads I’ve stumbled upon in quite awhile, with no particular order (that I can detect) to its succinct, highly-varied contents. Some of the best bits in it are stories/narratives/anecdotes, too long to quote verbatim, about specific famous mathematicians (I especially found the background on Stanislav Ulam fascinating, for example). If you can find a copy I highly recommend it.

Marilyn vos Savant Steps In It…

Marilyn vos Savant is widely-known for writing a column and giving answers to puzzles of all sorts... and also famous for sometimes having her answers challenged, only to have the critics often embarrassed — famously so in the instance of the Monty Hall problem, but occasionally with other problems as well (she’s also had to correct or refine given answers on various occasions).
I didn’t recall however her controversy over Andrew Wiles’ proof of Fermat’s Last Theorem ’til I read the below brief passage in David Wells' “The Penguin Book of Curious and Interesting Mathematics”:

“Less than five months after Wiles’s lecture, she published a book, The World’s Most Famous Math Problem (The Proof of Fermat’s Last Theorem and other Mathematical Mysteries), in which she claimed that non-Euclidean geometry is unsound, and so therefore is Wiles’s proof, because he uses non-Euclidean geometry. She also claimed that his proof depends on developments in mathematics that are relatively recent and poorly understood, and she encouraged her readers to try to ‘demolish Einstein’s theories of relativity’ by proving the parallel postulate.”

Wow, pretty harsh… I’ve never read her short (80-page) book, but as best I can tell, the consensus of professional mathematicians is more uniformly critical of it than some of her other writings; one mathematician calling the book “pure drivel” (and this is despite Martin Gardner writing the Foreward, initially calling the volume "a delightful, informative, and accurate book”).
IF I understand correctly, Marilyn did retract much of her criticism at a later date?
I recommend a very interesting read, by the way, about the whole Gardner/vos Savant relationship here:
http://tinyurl.com/y7vpy3ma  (link corrected, I think?)

Anyway, if anyone out there is more directly familiar with this particular controversy (and book), and cares to add anything further about it, I’d be curious to hear.


Again, from David Wells' "The Penguin Book of Curious and Interesting Mathematics" (as was Monday's post); this is one of the more humorous passages I've read in a math book (quoting verbatim):


"It was George Polya who admitted to studying mathematics at college because physics was too hard and philosophy was too easy. This is his view of the traditional mathematics professor.
'The traditional mathematics professor of the popular legend is absentminded. He usually appears in public with a lost umbrella in each hand.’
‘He prefers to face the blackboard and to turn his back on the class.'
'He writes a, he says b, he means c; but it should be d.’
‘Some of his sayings are handed down from generation to generation.’
’In order to solve this differential equation you look at it till a solution occurs to you.'
‘This principle is so perfectly general that no particular application of it is possible.’
‘Geometry is the art of correct reasoning on incorrect figures.’
‘My method to overcome a difficulty is to go round it.'
'What is the difference between method and device? A method is a device which you use twice.'

After all, you can learn something from this traditional mathematics professor. Let us hope that the mathematics teacher from whom you cannot learn anything will not become traditional."

If Gluten-free Flour Is Your Thing.... 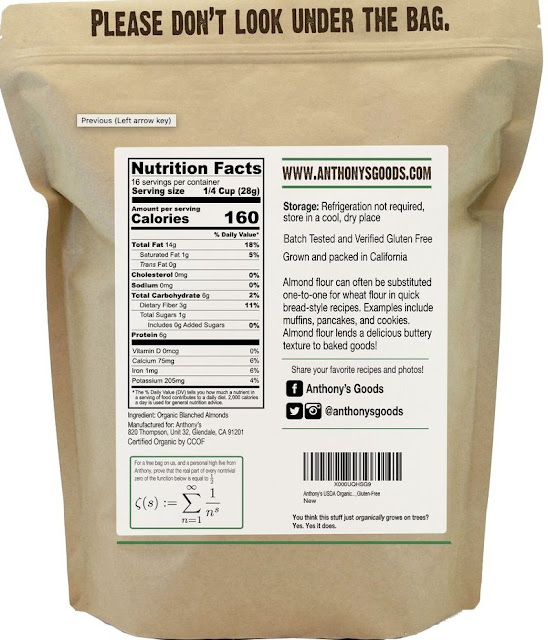 H/T to Nalini Joshi yesterday 2 days ago, for tweeting the above bag of Anthony’s gluten-free, almond flour. You get the feeling that Anthony, at heart, is a frustrated mathematician-wannabe… the lower left corner of the bag reads as follows:

“For a free bag on us, and a personal high five from Anthony, prove that the real part of every nontrivial zero of the function below is equal to 1/2”

[no mention that with the $1 million in prize money you'd receive for proving the Riemann hypothesis you could purchase several dozen bags of Anthony’s fine flour AND have money left over for coffee (even expresso).]

So seriously let us know what if any status that submission has.

Finally, drawing again from the David Wells' book that I mentioned yesterday ("The Penguin Book of Curious and Interesting Mathematics") a couple of old quotes from David Hilbert:

Upon being asked "What technological achievement would be the most important?" Hilbert replied, "To catch a fly on the moon. Because the auxiliary technical problems which would have to be solved for such a result to be achieved imply the solution of almost all the material difficulties of mankind."
Then asked what mathematical problem was the most important, he responded, "The problem of the zeros of the zeta function, not only in mathematics, but absolutely most important!"

A Book of Chocolates

I’ve enjoyed every David Wells’ math book I’ve ever encountered so didn’t hesitate, for $1, snapping up a 20+ year-old volume by him I saw at a recent used book sale, “The Penguin Book of Curious and Interesting Mathematics” —  260+ pages of fun, entertaining mathematical anecdotes, factoids, quotations, curiosities/tidbits.
I’d heartily recommend this volume to any math-lovers. It’s a veritable big box-of-chocolates for the math fan!

[I'll probably offer a few more bits from the volume through this week.]


"Music is the pleasure the human mind experiences from counting without being aware that it is counting."


Today is Andrew Wiles 65th birthday, making him old enough to be a long lost son of Tom Lehrer!

For all the fans of mathematician Lehrer, there have been several tributes to him since his 90th birthday on Monday, including:
Gödel’s Last Letter…:  https://rjlipton.wordpress.com/2018/04/10/tom-lehrer-at-90/
Nature:  https://www.nature.com/articles/d41586-018-03922-x
Buzzfeed:  https://www.buzzfeed.com/bensmith/tom-lehrer

…for any younguns saying “Tom whoooo?” you can visit YouTube videos on him here:
https://www.youtube.com/user/6funswede

...ohhh, and in honor of birthday folks out there anywhere this week:

[...meanwhile, a new book blurb over at MathTango today]

Posted by "Shecky Riemann" at 7:20 AM No comments:


Just passing along a couple of posts from today that I enjoyed:

a)  Longish final installment in a series of posts from Keith Devlin on heuristics, mathematical thinking, problem-solving, education... (a rich read):
https://devlinsangle.blogspot.com/2018/04/how-todays-pros-solve-math-problems.html

b)  Jim Henle with an interesting post playing with numeration… and, food (a quirky read that may yield ideas for the classroom):
https://www.scientificamerican.com/article/the-same-only-different/

Posted by "Shecky Riemann" at 6:51 PM No comments:


“When things get tough, there are two things that make life worth living: Mozart, and quantum mechanics.”