Books… Closing Out 2019 with some Faves

Popular math volumes continued to flourish in 2019 (or 'Year 3 of the Trumpocalypse' as it is otherwise known), and I'll just mention a few faves in this year-end wrap-up for ye merry holiday shopping....

My actual favorite read of 2019 isn’t even eligible to be my “book-of-the-year” pick… because it was published in 2006! I’ve mentioned briefly before that I thoroughly enjoyed John Derbyshire’s 2006 account of algebra, “Unknown Quantity” that I picked up perchance for a buck at a used book sale; perhaps the best, most accessible introduction to a lot of modern algebra that I’ve ever seen.

OK, onward though to the 2019 volume-of-the-year:
Despite my better judgment, my intentions not to let it happen, and my visceral internal sense of justice in the Universe… Ben Orlin has friggin’ done it again! For the second year in a row Ben takes the prize, this time for his “Change Is the Only Constant.” Ben must now promise NOT to write a book in 2020 just to give some piker like Keith Devlin, Ian Stewart, or Marcus du Sautoy a fighting chance next year. So if you’re reading this Ben, just slowly, gently put that pen down, amble off, slink into hiding for one year (maybe play some pickleball), and there need be no trouble, OK? Hope to see you again in 2021!

No one book shot to the top of my list as in some prior years, but in the end Ben won out for a couple of reasons:

1)  the uniqueness and consistency of his writing/humor/wit… something I’ve not encountered in 50+ years of reading popular math (I mean Jordan Ellenberg is funny, but not funny every 23 seconds like Ben — and now I want to know if Ben is this funny when he’s changing his daughter’s diapers... or is he, at that point, merely mentally calculating fluid dynamics?).

2)  I loved the last 6 chapters (out of 27 chapters) of this book. The first 2/3 of the volume were fun, but also a bit disjointed or choppy, and I didn’t initially think it would be book-of-the-year... until he totally won me over with those 6 final chapters, touching on some of my favorite topics in his inimitable way.

By the way, a fine recent transcribed interview with Ben about his book, here:

https://arstechnica.com/science/2019/11/limits-schlimits-its-time-to-rethink-how-we-teach-calculus/
…AND a great recent wide-ranging podcast interview with him here:
https://www.culturecaffe.com/podcast/2019/11/16/3-math

So much for numero uno; plenty of other good books this year, including these:

The Art of Statistics  — David Spiegelhalter  ...good introduction to statistics for a general audience from a leading British practitioner (this may well be my 2nd-place fave book of the year, though it does require some initial interest in stats to enjoy)

The Best Writing In Mathematics 2019 — Mircea Pitici another great, diverse volume from Pitici with a lot on problems, puzzles, and proofs this year, but with philosophy and history thrown in as well
[also, worth remembering that this book lists MANY other worthwhile volumes and readings from 2018/2019]

The Doomsday Calculation  — William Poundstone’s quirky volume largely on Bayesian probability, but touching upon various other interesting topics as well

The 9 Pitfalls of Data Science — Gary Smith ...from Oxford University Press and not well-distributed, but one of many recent, entertaining popular volumes on the problems with much-heralded ‘big data'

Several other books look interesting, but don’t know if/when I’ll find time to read (the Parker & Eastaway volumes are British-published, and for reasons that escape me, take their lazy, %#(@&!!ing, convolutedly-sweet time to even show up in the U.S.):

Calculus Reordered   — David Bressoud
Calculus Simplified — Oscar Fernandez (...at least the third calculus-focused book for a
general audience from Fernandez in recent years)
Do Dice Play God?  — Ian Stewart
Humble Pi   — Matt Parker
Limitless Mind  — Jo Boaler
Mathematics For Human Flourishing  -- Francis Su
Math Recess  — Sunil Singh
Maths On the Back of an Envelope  — Rob Eastaway
Proof  — Amir Alexander
————————————-——
Feel free to mention your own favorites from the year in the comments (especially ones I've left out), including more technical works you also think deserve attention.
Additionally, there were several books aimed specifically at math teachers that I haven't had the chance/time to see, but are probably worth knowing about if you are a teacher. 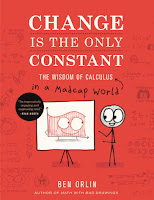