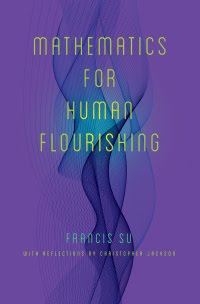 Since finishing it I’ll just say that 100x; certainly in the running for my ‘popular math book of the year,’ and, it’s only January (…of course that assumes that that rascal Ben Orlin doesn’t enter the fray this year with an entry). Some call Su’s book “inspiring,” though I think “meditative” and “reflective” may be more apt terms. It is certainly not at all the ‘typical’ popular math book (though there are a few fun math problems included). Indeed, words used in the blurbs for the book on the back cover include, "compelling," "galvanizing," "sublime," "lyrical," "all-embracing"... words not often associated with math volumes.

The book has already received so many accolades from so many quarters that I feel no compulsion to offer a review here. As most likely know, Su’s book is an outgrowth of a farewell address he gave to the MAA upon departing his term as President of the organization. That address pretty much went viral through the math cybersphere, if not beyond. If you are familiar with it than you know the flavor and themes of this book and Su's vision.

Often when speeches, essays, short pieces and the like are turned into book-length projects they come off as artificially stretched or composed of a lot of redundant ‘filler.’ Not so with Su’s volume; it maintains a rich, creative feel throughout most of the text. And as my original tweet indicates I believe it can be easily enjoyed by math professors and middle school students alike (and everyone in-between), as Su combines two words, “mathematics” and “flourishing” that rarely mingle in the public mind.

"Mathematics is a living and growing organism; within it are intricate and delicate structures of strong aesthetic appeal.  It offers opportunities for surprise as unexpected vistas open the mind to new lines of thought. There is a moment when, after struggling with an intractable problem, the mechanism is suddenly clear, and the problem resolves with a deep sense of rightness. In this it offers the most intense sense  of intellectual pleasures.

"Mathematics was created by all manner of people. There were religious bigots and atheists, political reactionaries and wild revolutionaries, snobs and egalitarians; some were people of great charm, some odious. If there is any common denominator, it is a driving curiosity, a desire to understand, a need to build, even if the structures be abstract. Admirably suited though mathematics is to modelling the real world, it can be developed totally without dependence on anything outside itself. Parts of it are simply mind creations, owing nothing to the physical world. It is a playground for the mind...

"Regrettably, many of us have never been allowed to see what mathematics is. It has been obscured by pointless emphasis on routines rather than ideas. This failure to distinguish what is important has led many people to see mathematics as a collection of totally arbitrary rules which have to be learnt by rote, and performed with the exactness and precision of a religious rite. Ask a person if there is much to be remembered in mathematics; if they speak of an overwhelming mass of material, their education in this area has been counter-productive; not merely neutral. Mathematics, properly seen, is a connected web; grasp at one piece and all the surrounding region comes to mind."


ADDENDUM:  Since I'm not giving a detailed review of the volume here I'll offer this link to a fuller review:
https://harvardmagazine.com/2020/01/francis-su-math