In case you missed any of them, just a few bits of news from today following the meeting in Helsinki between our lying asshole and their lying asshole (a meeting which Putin reveled about as “a success,” meaning that Donald got played big-time):

1.  Former CIA Director John Brennan calls upon Mike Pompeo, John Bolton, and John Kelly to resign their positions, saying that Trump’s Helsinki behavior crosses the threshold of “high crimes and misdemeanors” and “was nothing short of treasonous”:
https://talkingpointsmemo.com/livewire/john-brennan-pompeo-bolton-kelly-resign

2.  Russia's infiltration of the debased NRA and arrest of Maria Butina:
https://www.rollingstone.com/politics/politics-features/inside-the-decade-long-russian-campaign-to-infiltrate-the-nra-and-help-elect-trump-630054/

3.  Republicans criticizing Trump’s news conference with Putin (...perhaps even the odious GOP is reaching the end of its rope with this disgrace):
http://www.latimes.com/politics/la-na-pol-washington-reacts-helsinki-20180716-story.html

4.  Garry Kasparov called today, “the darkest hour in the history of the American presidency.”

5.  John McCain’s full statement on the meeting that he describes as a "pathetic rout... an illustration of the perils of under-preparation and inexperience":
https://www.mccain.senate.gov/public/index.cfm/press-releases?ID=A99FDA26-673D-4560-B4EA-5AEDF0685EC5
It starts off thusly (and only gets worse):

“Today’s press conference in Helsinki was one of the most disgraceful performances by an American president in memory. The damage inflicted by President Trump’s naiveté, egotism, false equivalence, and sympathy for autocrats is difficult to calculate. But it is clear that the summit in Helsinki was a tragic mistake."

6.  Similarly, Anderson Cooper’s first comment following the press conference: “You have been watching perhaps one of the most disgraceful performances by an American president in front of a Russian leader I've ever seen.” (...echoing plenty of other watchers)

...And on Twitter, following the news conference, the hashtag #treason was trending nicely.

Every member of Trump's Cabinet and staff with any self-respect and dignity (let alone allegiance to the Constitution, or concern for their own reputation and credence) ought now resign... we'll see who does. 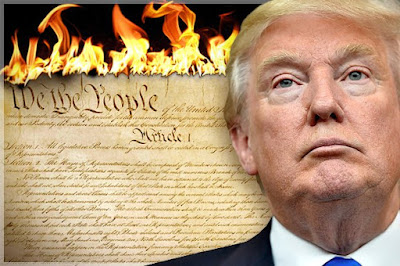