Of Cartoons and Rorschach Tests (...and Pillows)

Ben Orlin has been on fire lately both on Twitter and his blog… cracking me up with his amateurish-seeming drawings and accompanying thoughts… who knew math could be THIS funny! (let alone funny & deep at the same time!).
But with that said, from time to time one of his scribbles doesn’t strike such a chord with me and I think to myself “mehh, not up to his usual level”… then I go read the comments to him and almost invariably there are some folks just rolling on the floor praising said cartoon as one of his best ever! It’s almost as if each cartoon is some sort of Rorschach test of people’s perceptions and funny bones — partitioning readers into groups.

Some decades ago I worked in a lab with a female colleague who like me, broke up at Gary Larson’s “Far Side” cartoons (…but then who didn’t back-in-the-day). Anyway, again the thing that struck me was how often cartoons that she found absolutely hysterical (like this one) I thought were kinda dumb, and ones that slayed me (like this one), she thought were pretty lame.  Again, Rorschach test or what? I wonder if that ‘baby’ cartoon appeals more to females and the dog/cat especially to pet-lovers (or is that completely off the mark???) — I don’t know what’s going on, except of course senses of humor are highly variable.

As a youngster there was a joke that cracked me up and has ever since… it’s completely stupid, yet something about it inexplicably tickles my fancy even as a rational adult:

“I had the weeeirdest dream last night. I dreamt I was eating a GIANT marshmallow… and when I woke up, my pillow was gone.”

Or to get at least a little more modern, here’s one of my absolute favorite (of so many) Steven Wright lines:
“I installed a skylight in my apartment.... The people who live above me are furious!”

Yet I rarely see it make lists of his top jokes. C’mon people, that’s pure gold! (...but, honestly I don't know why these delight me so, though there has been a lot of study of what makes something funny, HERE, HERE).
I've always been a sucker for the quick one-liner, Henny Youngman-Rodney Dangerfield-Steven Wright style of jokes; more bang per word. I have a friend who loves to tell long, involved, story-like jokes that try my patience, even when the punch line is good.

My mother used to say (semi-seriously) that there was no accounting for peoples’ tastes in mates or wallpaper! I might add to that, humor.

Almost two decades ago British psychologist Dr. Richard Wiseman famously ran a year-long experiment attempting to discover the best joke in the world! If you’ve never read about it, it’s worth a gander for sheer entertainment:
http://www.richardwiseman.com/LaughLab/introduction.html

Here verbatim, in the final analysis, are the top two chosen jokes back then (by now, most will be familiar with them):

Watson replied: “I see millions and millions of stars.”

Holmes said: “and what do you deduce from that?”

And Holmes said: “Watson, you idiot, it means that somebody stole our tent.”

OK, so none of this has much to do with math, other than to say, Ben, keep up the great work… for the benefit of those of us who astutely recognize and appreciate which of your scrawlings are truly the funniest.

Ohhh, and a reminder to readers that this is on the way in September: 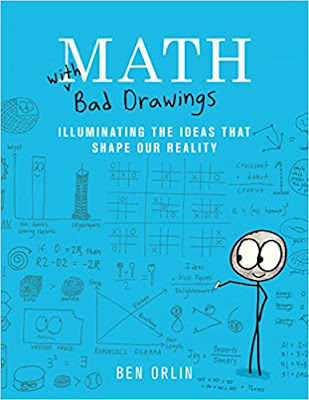 Have you seen either of Patrick Vennebush's books? Very much your taste, I'd guess. I love them. http://www.mathjokes4mathyfolks.com/

Thought for sure the research project to find the funniest joke was going to lead to the Monty Python skit about the world's funniest joke.

I actually think there's some similar to the aesthetic of a good joke and a good theorem. A bit of surprise in the punchline that makes you grin and invokes delight.

Hi John, I knew of Patrick's first book, not sure I was aware of more than 1... and overall I really only find most math jokes sort of so-so (do kind of like math limericks though), which is one reason I think Ben's work is at a whole 'nother level and quite remarkable.