"Here is a quotation from G.K. Chesterton: 'Poets do not go mad but chess players do. Mathematicians go mad, and cashiers; but creative artists very seldom. I am not attacking logic: I only say that this danger does lie in logic, not in imagination.' Here also is a snippet from the flap copy for a recent pop bio of Cantor: 'In the late nineteenth century, an extraordinary mathematician languished in an asylum… The closer he came to the answers he sought, the further away they seemed. Eventually it drove him mad, as it had mathematicians before him.'
"The cases of great mathematicians with mental illness have enormous resonance for modern pop writers and filmmakers. This has to do mostly with the writers'/directors' own prejudices and receptivities, which in turn are functions of what you could call our era's particular archetypal template….

"Chesterton above is wrong in one respect. Or at least imprecise. The danger he's trying to name is not logic. Logic is just a method, and methods can't unhinge people. What Chesterton's really trying to talk about is one of logic's main characteristics -- and mathematics'.  Abstractness.  Abstraction."

-- From "Everything and More" by David Foster Wallace 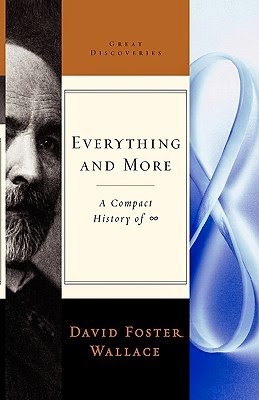 I've lately been re-reading parts of David Foster Wallace's "Everything and More: A Compact History of Infinity."
I don't read fiction, but that doesn't stop me from sometimes being intrigued by fiction writers, or in this instance one who additionally wrote non-fiction. And I have other reasons to be fascinated by Wallace:
He spent much of his childhood in Champaign/Urbana, Illinois, very near my own hometown, and died tragically in 2008 while teaching at my alma mater, Pomona College, in Claremont, California. In-between, his brain seemed to gallop effortlessly all over the place.
Of course it's not his widely-acclaimed, award-winning fiction that interests me; it's his, slightly-lesser-known, non-fiction. That a person of the humanities with an English degree, who poured himself into long, involved, complex novels and wordplay, was capable of also writing about deep mathematics is fascinating. It's a little less strange given that Wallace did deeply study philosophy, logic, and mathematics at the college level... but still amazing to me that "Everything and More" could be born in the same mind that authored "Infinite Jest"(…interesting that "infinite" makes its way into this title as well).

Wallace called his 300+ page volume ("Everything and More") on infinity a "booklet," and he no doubt genuinely considered it but an introduction to the whole subject; scratching the surface of a topic that so often baffles undergraduates, even leading to incredulity or heated arguments, amongst young math majors. Yet the book is a meticulous parsing of the subject as virtually never found in a popular work. In fact, I suspect it falls into that category of 'widely-bought, least-read books ever,' with a large percentage of buyers never completing it; purchasing it solely based on the author's reputation, and then abandoning it after the first 30-50 pages.

The book received a number of favorable reviews upon release, but several professional mathematicians also harshly critiqued it, finding it peppered with technical errors… I s'pose that I, as a non-professional, tend to be more forgiving, spellbound as I am by Wallace's ability to even approach these strenuous subjects innovatively… not that that justifies inaccuracies, but just that my joy with the volume stems not simply from the mathematics/philosophy entailed, so much as from the sheer audacity of a renowned novelist crossing boundaries to tackle such matters. I can't even imagine who this book was intended for… surely not the same audience who loved Wallace's fiction; but nor for professional mathematicians who would find faults in it. And not just for me, an audience of one ;-) Somewhere out there must be other "mees," I guess, who stand almost in awe of what Wallace accomplished: the mix of language and math, of thought and meta-thought, of narrative and cerebral-wrestling, while attempting to communicate it all to a mass(?) audience. As I wrote once before, this volume is "written in an informal and conversational tone about ideas that are utterly UN-informal and UN-conversational (...and the multitudinous footnotes are virtually as fascinating as the main text)."
And Wallace's prose isn't just deep, but in some ways, prescient... anticipating something we now commonly hear about high school math education, here's what he said in 2003 about college-level math:


"The trouble with college math classes -- which classes consist almost entirely in the rhythmic ingestion and regurgitation of abstract information, and are paced in such a way as to maximize this reciprocal data-flow -- is that their sheer surface-level difficulty can fool us into thinking we really know something when all we really 'know' is abstract formulas and rules for their deployment. Rarely do math classes ever tell us whether a certain formula is truly significant, or why, or where it came from, or what was at stake. There's clearly a difference between being able to use a formula correctly and really knowing how to solve a problem, knowing why a problem is an actual mathematical problem and not just an exercise."

This remains one of the quirkiest, both convoluted and semi-profound, volumes on my math bookshelf, from one of the quirkiest, most imaginative minds America has produced. Possibly there is some irony, some stinging irony, that Wallace, a long-time sufferer of depression, died tragically at his own hands, via hanging at the young, fertile age of 46... possibly even suffering mental demons not altogether dissimilar from Georg Cantor, a century earlier; died perhaps an example of the same stereotype or "archetypal template" he points to in the opening passage above ("the closer he came to the answers he sought, the further away they seemed").

One of the endorsement blurbs on the back of my copy of the volume says, "...David Foster Wallace is the perfect parachute buddy for a free fall into the mathematical and metaphysical abyss that is infinity." I think "abyss" may be too strong a word, but I do like the imagery of 'free-falling' into infinity... with an English major no less!
This volume won't suit a lot of people's taste, but reading it more as a treatise on human thought/genius and psychology, than a math treatise, I return to it... in wonderment and reflection... each year.