Having profiled 3 mathematicians at this point (Matt, Evelyn, David), seemed perhaps time to branch out a bit, while staying with someone that most mathematicians (and all “Big Bang Theory” fans) will know: physicist Sean M. Carroll....

Dr. Carroll is ubiquitous in the cyberworld of non-tenured professorial types (but more on that later), and truly one of the most publicly-engaged scientists ever to brandish an emoji. Whatever you think of his commitment to crazy Everettian theories you can’t deny his sincerity, persistence, and boyishly good looks, which he may be sick of hearing about (...I have it on deep background that there is a portrait in his attic which is graying and aging shamefully while Sean’s face and hair remain unchanged over time).

Sean was born on October 5, 1966, making him, to the best of my memory, a Vertigo (but then I get all of Alfred Hitchcock’s films confused so who knows). It also means he can’t even remember JFK’s assassination, and I don’t much trust anyone who can’t tell me where they were the day that Donald Trump's dad took out JFK.  Anyway, Dr. Carroll seems always quite content, affable, and optimistic… perhaps yet another reason not to be trusted. But seriously, I don’t know anyone (in my circle of 3 friends) who doesn’t like Sean. Part of it is that little bit of accent he has, that almost sounds British or European or perhaps Nepalese Yak-herder-ish… I can’t quite place it, but it’s almost infectious (and I mean that in a good way, not a bubonic plague sort of way).

I have no idea if his parents named him after Sean Penn or Sean Connery, but I feel safe surmising that he was NOT named after Sean Hannity (who’s name, by the way, is merely an offshoot of his own grandpa Satan Hannity).

Sean’s fuller academic background can be seen HERE, where he discloses that he matriculated at Villanova, enrolling there, no doubt, for the basketball, before getting sidetracked by all the coeds he noticed sashaying to astrophysics classes.
Next stop was Harvard for his PhD. in astronomy (a school that has since proven to be a renowned training ground for future bloggers).

Here are some posts he’s done specifically focused on mathematical topics (…unfortunately, not a single one of them proves the Riemann Hypothesis):
http://www.preposterousuniverse.com/blog/category/math/

I think if you drop him a craft beer you automatically get 37 minutes of free interview time, during which you may hear for two hours about the first nano-zeptillionth second of the Universe in excruciating detail... even though he wasn't even there at the time.
And for a glass of high-end bourbon he might even collapse a wave function or two right in front of your eyes... something that I previously thought only David Copperfield could do.

You can easily spend the next millennium just watching Sean in videos explaining the same things to different fans over & over again… NO, actually he loves to talk about a wide variety of topics from philosophy to science to religion to poker to humanity to basketball stats to free will. He's almost a one-man activist for raising civil conversation on the Web to an art form (and now that I think about it, I've never seen Sean and Jordan Peterson in the same room at the same time... hmmm). I'm pretty sure there are Sean groupies all over the country, not unlike what Barry Manilow once had.
The University of Chicago (where he was teaching), to their eternal shame, failed to give Sean tenure in 2006. And while he doesn’t overly-dwell on it, his discussion of elite university tenure was one of his early widely-read blogposts:
http://blogs.discovermagazine.com/cosmicvariance/2011/03/30/how-to-get-tenure-at-a-major-research-university/#.XL0DaC-ZP_Q
By now he’s so well-known and has so many ways of making money and friends in high places, that he could probably tell Chicago to KMA (…but he would never do that, so I shan't suggest it either).
After he departed U of C, a small college out west called “Caltech,” in their abiding sympathy for the unemployed, took a chance on him to fill the shoes of the late Richard Feynman. In desperation he took the position, forfeiting those delightful Chicago winters (and life on the streets) for the abject misery of Southern California and its boring, constant 72˚ lush, blue-sky sunny days -- the rest, as they say, is history (perhaps with some astronomy, booze, and rock ’n roll thrown in). He seems to love teaching, be it in the classroom or the world-at-large. And his two cats, Ariel and Caliban, have probably learned more physics than most American high school seniors:

Sean has written two books centered on popular physics topics (time and the Higgs buffoon, or something like that) and a third book (“The Big Picture”), more philosophical and broadly appealing, touching upon an ambitiously wide range of subjects. Sean argues for what he calls “poetic naturalism,” essentially proposing that things are the way they are because things are the way they are… and that is all the case because things are the way they are. Carroll was actually raised as an Episcopalian, but my eldest sister was married by a hard-drinking, womanizing, and later-defrocked Episcopalian priest, so it's no surprise to me that Sean is now an atheist -- unlike some though, he doesn't bludgeon you over the head with his personal view, preferring instead to use a scalpel and a putty knife.
Later this year his 4th book, explaining once-and-for-all quantum mechanics to the proletariat, will hit the stores… at least in this universe. Read up! this may be your last, best chance to understand that which every other physicist confesses is not humanly comprehensible. Sean believes in both the multiverse and the many worlds interpretation of quantum mechanics, but is waiting for more LHC data to decide whether or not Santa Claus truly exists.

I don’t know where he finds the time (even assuming it goes in all directions) but last year Dr. Carroll started his own hour-plus, splendidly-done podcast ("Mindscape"), and from the get-go it’s had the quality, erudition, variety, that are by now his trademark. The range of guests has been phenomenaI from Homer Simpson to Taylor Swift (or some such). I can’t do it justice here, but if you’re not familiar with it, you MUST visit and listen to a few of the unpredictably wide-ranging guests and conversation (the episode with Wittgenstein, so I'm told, was especially enthralling).
(p.s… though Sean enjoys some philosophy he’s been known to utter things that might make Karl Popper rise up out of the grave and bop Sean on the noggin, if only he could get the damn lid off that wooden box.)
Last year Sean opened a 2-and-1/2 hour Joe Rogan show talking about his podcast (before proceeding to many other topics):
https://www.youtube.com/watch?v=ZtxzMb9CpTM
(His first appearance, by the way, on Rogan is HERE.)

I have to admit I actually enjoy Sean's philosophical/cultural commentaries/analyses even more than his physics instruction.
Dr. Carroll is of course on Twitter, @SeanMCarroll, where as a rational, well-spoken, decent human being he persists amongst a cesspool of apparent aliens and trolls from the Planet Zluto. Jack Dorsey allows him to stay on the platform in spite of his pleasantness. Actually, for those who don't already know it, Sean does have a second Twitter account just for 'venting about politics' where, on any particularly bad day, he just might employ the word "darn."
(Some have suspected he's also the force behind this Twitter account, but there's not a pico-shred of evidence for that.)

Additionally, Sean has done at least one “Ask Me Anything” on Reddit, but since I ignore that site I have no idea if anyone stumped him. I would however make a special point of watching if he ever went up against James Holzhauer on Jeopardy!
By the way, it’s very important NOT to confuse physicist Sean M. Carroll with the biologist Sean B. Carroll (just think “M” for multiverse versus “B” for Buttigieg, if that helps) — I can only imagine the confusion and hilarity this may have led to on double dates.

Speaking of double-dates, in 2007 Sean did not marry his childhood sweetheart, Marie Curie, but instead, in a match made in star cluster NGC5139, wedded English-major-turned-science-blogger Jennifer Ouellette in one of the first-ever adorable blogger hookups in cyber history — I have no idea how OKCupid pulled it all off.
By now all their raw animal lust has probably dissipated and they’ve likely settled into mundane lives, editing each others’ science scrawlings (and perhaps seeing other bloggers on the side when discretion allows… but I won’t speculate on any names). No, no, I’m making that up for the sake of prurience and more clicks. Not even Tucker Carlson and Sean Hannity make a lovelier couple than Sean and Jennifer.
In fact in earlier years of this blog I had a Valentine’s Day tradition of linking to Jennifer’s lovely blogpost about meeting/marrying Sean, and the horniness of Fourier transforms. It’s classic:
https://blogs.scientificamerican.com/cocktail-party-physics/love-among-the-equations/
(And according to one rumor... that I'm starting here... Bradley Cooper and Lady Gaga have been tapped to star in the big screen version of Sean's life.)
Moving on, one of my all-time favorite science stories, is Sean’s recounting of his association with that bloke Stephen Hawking; if you’ve never heard it, it’s must-listening (or must re-listening if you have heard it):
https://www.storycollider.org/stories/2016/1/1/sean-carroll-what-would-stephen-hawking-do

I'm not competent to judge Sean's considerable body-of-work in cosmology and theoretical physics, so I can't say with certainty if he's won his various awards and citations through brilliance or bribery, but I can say with confidence that he'd make a better President, or EPA Head, or Secretary of Interior, or Senate Majority Speaker, than those currently in office. (But, heck, I'd say the same thing about Garrett Lisi, so take that for what it's worth.)

Famously, Dr. Carroll has contended that all the underlying physics of everyday life are now understood and can be summarized in one single equation. I know you’re probably all thinking the equation is:

…but NO, you’re badly mistaken -- as if serving no purpose but to mortify Leonhard Euler, Dr. Carroll’s equation looks like this:

You can imagine the jocularity that ensues whenever Sean brings this up at a cocktail party or leaves it on a napkin as the tip for a waitress at Hooters (...of course Sean only dines at Hooters when his department head schedules a working lunch there... or, on half-price pitcher nights).

Anyway, I could write about Sean for a whole ’nother 43 minutes and still have barely scratched the surface. I don’t know that he will ever be eligible for a Nobel Prize, but if there was such a thing as a Noble Prize he’d be a shoe-in!
I hope you now feel you know Dr. Carroll (at least the one who resides in this universe and with middle initial “M”) maybe a little bit better… and I hope one day, somewhere, even if in a galaxy, or another universe, far, far away, he gets tenure. 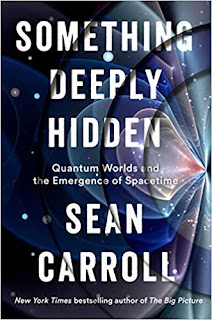