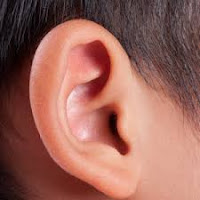 No math today, just a personal anecdote perhaps having relevance to hearing-impaired others. Over the years I’ve had casual conversations with a number of scientists, mathematicians, and personal acquaintances, about hearing loss (afflicting close to 50 million folks as they get older), and what follows is just a personal experience from this sample-size of one:
[hearing loss comes in a multitude of forms, so my experience may not apply to others]

Close to 20 years ago I awoke one morning and quickly realized much of my hearing in one ear was gone! Bingo. (other ear unaffected) After some retrospection I realized my hearing had probably been gradually declining over the prior year and simply passed some threshold that made it readily apparent to me that morning. At any rate, the doctor could figure out no cause for the loss and was quite baffled, even though I logically deduced what I believe with near certainty was the cause (but won't take time to explain here) — every hearing doctor/otolaryngologist I’ve talked to says my explanation isn't valid, which frankly, only makes me distrustful of their understanding of hearing complexities!

The doctor further said that the kind of hearing loss I had would get gradually worse over time, and that hearing aids would do little good; eventually a cochlear implant would be needed. Also, I should be checked every year to track the progression of the loss.

Stubborn oaf that I am (when it comes to many medical matters) I’ve never been re-checked in the almost 20 years since, but have watched my hearing very slowly decline further. Hearing aids generally aren’t covered by insurance and are expensive, on the order of $2000 - $3000 or more including all the office visits — there are additional maintenance costs along the way, and they may only be good for 5 years or less, before you need to upgrade. In short, there are a few dozen causes (even more in the Trump era) I’d prefer to see that money go to than to my right ear (and getting by with one good ear is do-able, if limiting).

Over the years I’ve tried a few cheap Personal Sound Amplifier Products (PSAPs) sold over-the-counter, which are quick to emphasize they are NOT “hearing aids” but simply sound amplifiers.  They do what they say they’ll do — amplify sound, all sound (although you can purchase more expensive models that have some filtering and directional capabilities). I’ve been surprised though by how helpful they are — for listening to a TV, lecture, movie, or other point-source of sound; they are less helpful in noisy rooms/gatherings, and the like. So even the cheapest ones, ~$20, when compared to thousands of dollars for hearing aids or tens of thousands of dollars for a cochlear implant, actually have some value. They can however be awkward, inconvenient, and eat through expensive batteries, and be less usable during athletics or other physical activities, so I was never terribly thrilled with them. The quality and variety of these products seems to be significantly improving however, with time and expanding customer-base.

Recently I had occasion to get one (again for $20) that is small, discreet, usable during many sports, and best-of-all, re-chargeable (no need to buy batteries every month). I’ve been pleasantly surprised at just how well it works — each year I’ve gotten closer to looking into cochlear implants, but at least for the moment, feel I can once again put that off for quite awhile.
I won’t name the cheapie model I got that beat my expectations, but will say there are LOTS of these small behind-the-ear PSAPs available now, ranging up to several hundred dollars (and given how well this $20 model works for me, I’d definitely consider upgrading to a more expensive one later). If you Google “hearing amplifiers” you’ll learn of a slew of them with varying features/styles (and various pros and cons).

One reason I put off for many years buying this particular device is because it not only looked and was cheap (and made in China), but I saw several bad reviews of it on the Web (also saw good reviews, but thought the number of bad reviews was telling). In retrospect, my cynical-self now wonders if any (many?) of those bad reviews are ‘planted’ by the hearing-aid industry who probaby don’t want folks looking at $20-$100 devices that might do some good, when they’re trying to sell you $2000+ devices? (and many of my friends with real hearing aids have significant issues with them, even after spending that amount of money). Of course you have to be somewhat leery of all reviews on the internet anyway! As the population continues to age, hearing aids are definitely a boom product with huge profits to be made, and a lot of competitors vying for a slice of those profits.

If you’ve been putting off dealing with hearing loss (as most do) for the usual sorts of reasons, these more-reasonably priced devices may be worth exploring (while also acknowledging that a do-it-yourself approach is not advisable in many cases). I've had good luck my entire adult life treating myself for typical health ailments, while also sensing when professional medical intervention may be called for. Your mileage may vary. ;) And if one day self-care or treatment costs me dearly, well, que sera sera... (I'm stoic about such matters).
Anyway, as someone who more-often-than-not is disappointed in products I purchase, this has been an instance of low expectations being happily well-exceeded... just a personal anecdote, for any who may get some encouragement from it.

ADDENDUM:  just a bit of update (1/5/19) for whatever it's worth…
after 4 months of frequent use the $20 PSAP became a little more glitchy… requiring a bit of fidgeting and more frequent battery re-charges — still, I was quite pleased with it, especially given that I wore it during sports and heavy sweating at the end of summer, despite cautions that it shouldn’t (because of electronics) be exposed to dampness. I still use it part of every day.  But I was curious what a more expensive model might do, so after much research ordered another model of PSAP for ~$75. It’s slightly sturdier, but also slightly bulkier (with a less snug, comfortable fit, especially for all-day wear); it gives slightly improved hearing features/sound filtering, but also after a few weeks required more frequent re-charging and fidgeting, and combined with the lower comfort-level (for me) I can’t view it as 3-4 times “better” than my prior choice (though it was ~4 times costlier). I won’t likely need another PSAP anytime soon, but when I do I’ll be torn between simply going back for another $20 model or trying out something in the $120 - $150 range. As time goes on I can only imagine these devices will continue to improve, become even more readily-available, and lower in price.  I also suspect the selection of re-chargeable models will continue to grow -- currently models running on batteries remain the bulk of choices.
[One further note I'll make is that both devices I currently have were made in China, and I do now wonder if ones produced in Germany or Japan might have better overall quality control and be worth looking at more closely.  Also, after much wear, the re-chargeable products I've chosen, require more frequent charging than they did initially -- it may be worth considering battery operated versions, of which there are MANY, even though the cost of batteries would be recurring.]