Recently on Twitter @mathematicsprof asked for suggestions on who ought be commemorated if a statue of a native-born American (U.S.) mathematician was to be erected in Washington D.C. Of course famous mathematics names (including several that were mentioned) have a tendency to be British or otherwise European, so it’s not surprising that many different names arose to the tweet, without any one standing out above all others. Among those getting at least one mention were the following (in no particular order):
David Mumford
Paul Cohen
Ken Ribet
John Milnor
Ed Witten
John Nash
Julia Robinson
Martin Gardner
Katherine Johnson
Raymond Smullyan
Claude Shannon
William Thurston
John Tate
Jim Simons
Stephen Smale
Ronald Graham
Donald Knuth
Persi Diaconis
Alonzo Church
Definitely a tough choice! I very slightly lean toward Thurston, but good arguments can certainly be made supporting many of these choices (Nash, Witten, Shannon, Milnor were among those with multiple votes). And I'd throw Barry Mazur into the mix as well. Also, was a little surprised that several popular math writers didn’t seem to get a mention: Reuben Hersh, Morris Kline, Philip Davis, James Newman, Ed Kasner, Paul Lockhart.  A bit odd too, that despite responders citing a great many non-U.S. born mathematicians (mostly European) I don't recall Grothendieck or Perelman coming up -- political bias or mathematicians just not wanting to be represented by social outliers? (or perhaps repliers simply knew the latter two were foreigners, while unaware that many others named, some of whom were naturalized Americans, were born elsewhere.)
Anyway, interesting to think about... (ya know, in case any of you were hoping to replace some Robert E. Lee monument with a mathematician) ;) 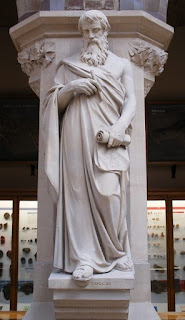 I think I'll use this as a math history assignment this semester. Pick a name, make a case! I'll find it difficult to choose, but I think have it narrowed down to Robinson or Thurston.

Of course, might be benefits to having a statue of an immigrant as well.